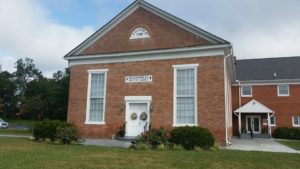 The first Baptist churches were organized in England in 1712. The General Association of Baptist met in 1714 in London.  Messengers were sent out to start new churches. Robert Norden was sent to Virginia in 1715. He lived in Prince George County, Virginia. Two homes in Prince George County were certified by the court as public meeting places. The Baptist movement spread quickly, but remained south of the James River. Samuel Harris brought the doctrine to Culpeper County in 1765. Two years later the Upper Spotsylvania Church was formed. Soon Baptist churches began to spring up throughout the county.

Massaponax Church was established in 1788. The original meeting house, probably a log cabin, was very near Massaponax Creek. It was customary at the time to build near rivers or streams for the water supply. The little church grew and soon it became too small and ill located. The church site was moved to it’s present location, the corner of US Highway 1 and Route 608. A small frame building, constructed by the members; was adequate at first. The membership grew quickly and this structure also proved to be too small. In 1859 a new building was erected. The bricks for the exterior walls of the church were made and burned in a kiln in a nearby field. The interior walls were made with sun baked bricks, rendering them soft and easy to damage.  This new building was completed in October of 1859 and cost $3,000. The first pastor of the new building was Joseph Billingsley. He was famous for preaching long sermons of about two and a half hours. This did not sit well with the congregation. On one occasion, it is said that, they wedged the door to exclude him, but he preached his sermon in the church yard. Billingsley remained at the church for many years and baptized more than 300 members. 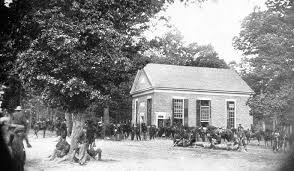 The new church building was less than 10 years old when the Civil War began. In 1863, the church was instructed to give letters of dismissal to all black members of the congregation. The black congregation had managed to form several small churches of their own during this time. The war, lasting for four years, brought church services to a stand still. The location of the church was just right for both the Northern and the Southern forces as they passed through the area. Both armies used the building as their headquarters. It was used as a stable, a hospital and a meeting place to plan strategies for the next attack. The walls of the church where filled with stories of trying times, crude battle scenes, messages of love and the names of companies, troops and soldiers. When the war was over, the members began the great clean up. The walls were whitewashed of the unsightly marks and the sad stories were forgotten.

In 1888 the church celebrated it’s 100th birthday, which was advertised in the local “Our Churches” bulletin.  On September 30,1888, the church was filled to overflowing. Seven Baptist ministers were present. An arbor was constructed in the yard to hold services for the children. The church continues to have a Birthday Celebration every year in late September.

Massaponax Baptist Church grew both in membership and ministry. In 1894 the Ladies Aid Society was formed and the women’s ministry and mission work began.   In 1938 the church began showing signs of age and was redecorated with a new roof, fresh paint, new carpet and chandeliers. During this renovation, the writing on the walls from the Civil War was uncovered.  Today the writings can be seen in the balcony and are protected with a plexiglass frame.  An addition was built in 1949 to house the Sunday School classes and a fellowship hall. A lovely brick cottage, to provide living space for the pastor, was built a short distance from the church in 1956. 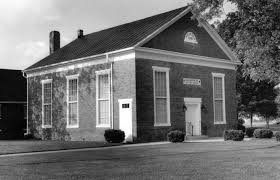 The church has continued to grow throughout the years. The membership continues working to preserve and improve the building and grounds. Other improvements have included: paving the parking lots in 1968, building a baptistry in 1970, beginning a living memorial fund in 1971, starting a newsletter in 1981, improving the air conditioning and adding a sound system in 1987 (upgraded in 1998).  Because of the church’s valuable history, the  writings on the walls in the balcony were covered with Plexiglas.  The church was added to the National Register of Historic Places in 1991 and later to the Virginia Civil War Trails.  In 1999 an outdoor pavilion was erected and the cemetery located on the church grounds was fenced in and improved.  In the fall of 2000, the church membership voted to purchase five additional acres of land adjacent to the current church property for future expansion.  In the fall of 2001,  playground equipment including two swing sets were erected on a portion of this new land adjacent to the pavilion.  As the church membership continues to grow, more renovations will be needed. Future plans include: enlarging the classrooms and fellowship hall, installing new carpet, and adding and a ball field.  A new building has also been discussed.  We invite you to visit our church and become a part of this living, growing community of God.